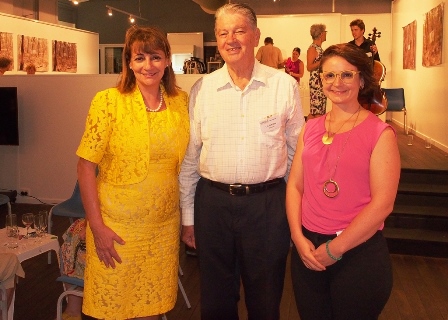 The 2017 Australian Concerto and Vocal Competition (ACVC) was launched by Townsville Mayor Cr Jenny Hill at a special event at the Umbrella Studio contemporary arts, Townsville, on March 1st.

President of the ACVC, Mr Cris Dall’Osto welcomed and thanked those invited guests who were in attendance and gave particular thanks to the Townsville City Council for its continuing support to the Competition. Cr Colleen Doyle, Chair Community and Cultural Development Committee, Townsville City Council, was present but Cr Kurt Rehbein, a member of the ACVC committee, was unable to be part of the festivities because of family commitments.

Cris also thanked Umbrella Studio for the use of its facility which proved to be a great place for guests to mingle surrounded by the art works in Laurel McKenzie’s PhD graduate exhibition Venus Rising, Furies Raging: Bodies Redressed.

The ACVC Artistic Director Katy Frewen-Lord presented an outline of the 2017 competition, emphasising the benefits to the musicians who will participate in this world-class event. She also announced the official accompanists and adjudicators for this year’s event.

You can read more about the adjudicators and accompanists on our website here.

During the evening excellent musical performances were given by The Rianta Belford Wind Trio and by cellist Michael Carroll who was placed third in the Young Performers Soloist Section of the 2016 Competition.